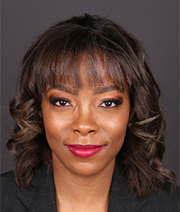 Lena Y. Henderson was a founding board member of the Women’s Property Tax Association. Lena passed away suddenly at a young age, and we will continue to honor her memory. At the time of her death, Lena was the Vice President of Programs.

As an attorney, Lena worked as a commercial analyst and a PTAB litigator with the Cook County Board of Review for Commissioner Larry R. Rogers, Jr. Lena received her Bachelor of Science degree in Economics from DePaul University and her Juris Doctor degree from the University of Wisconsin Law School.

At Lena’s celebration of life on March 27, 2021, the Women’s Property Tax Association presented this resolution to Lena’s family.